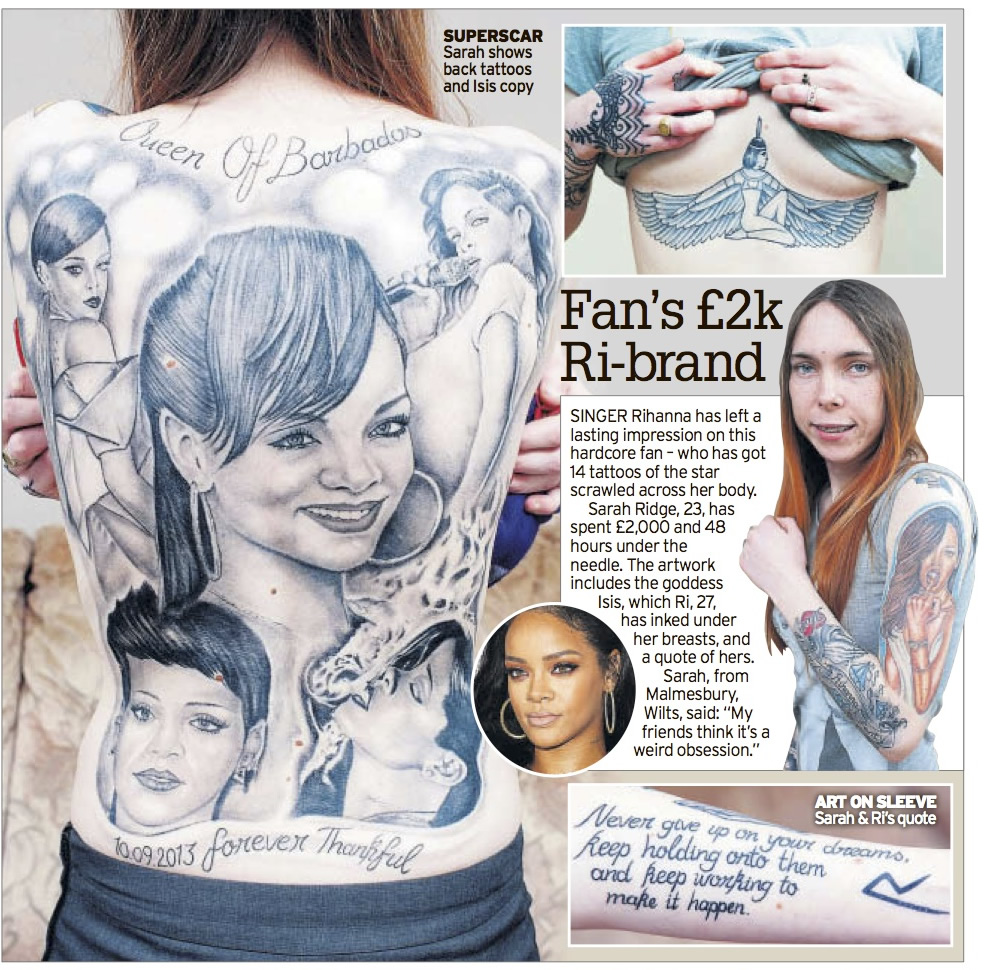 The world’s most dedicated superfan?

Are you the world’s best superfan? Read about Rihanna’s No.1 fan who tells how she spent 2k covering her body in Rihanna tattoos?

When Sarah Ridge contacted us with her story, we knew a newspaper would want to share her story. The 23-year-old Rihanna ‘superfan’ has gone to extreme lengths to show her love for the ‘Diamond’ popstar. 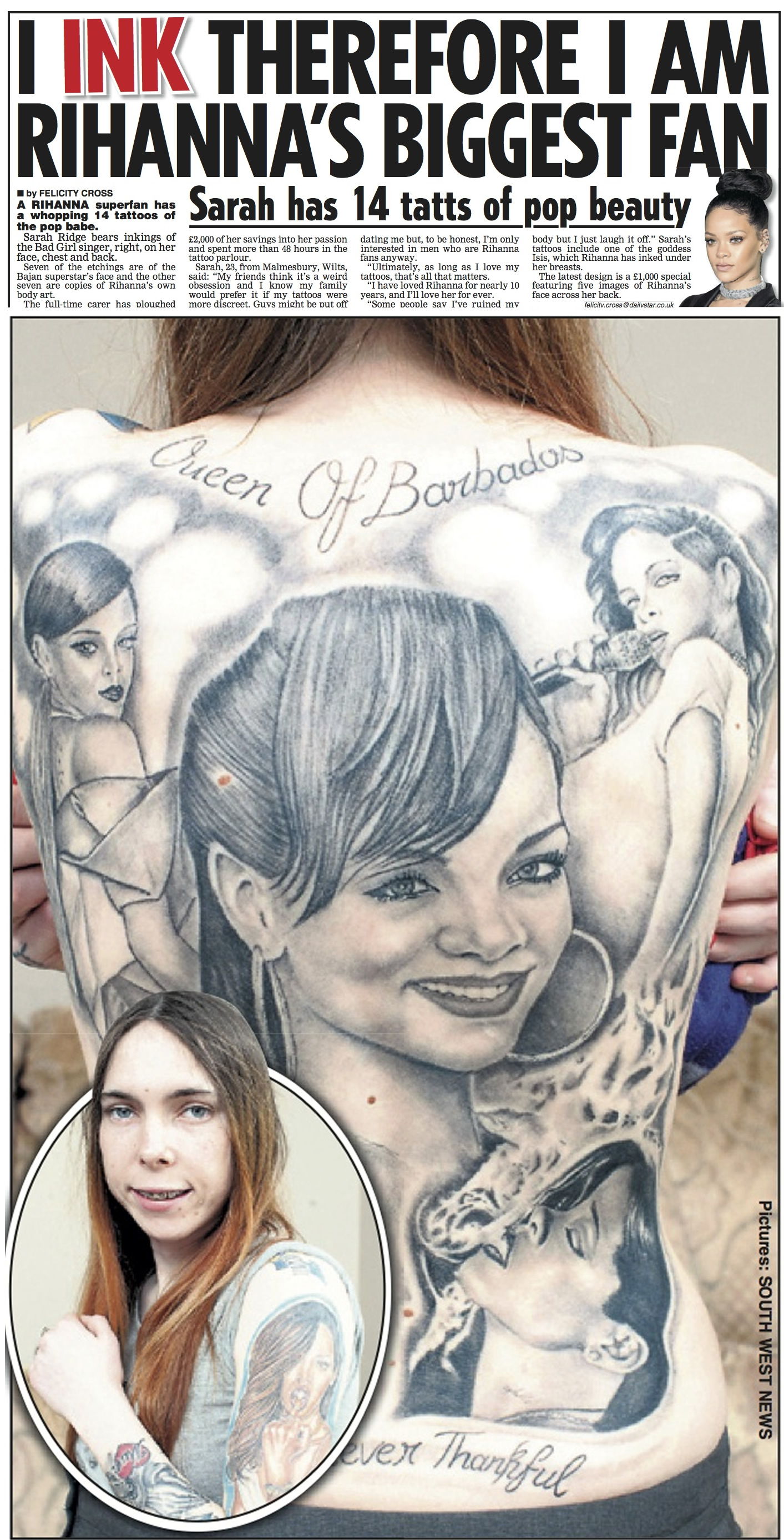 Sarah, a full-time carer from Malmesbury, Wiltshire, wasn’t content with just posters of Rihanna on her wall – and decided to have the star tattooed all over her body instead. She now has seven tattoos of her face along with three imitations of Rihanna’s iconic inkings – including the Goddess Isis, which the singer has tattooed under her breasts.

On top of this, she has Rihanna’s full name inked on her left forearm. Her latest tattoo – a giant mural with five portraits of Rihanna’s face across her back – cost £1,000 and took a total of 48 hours to complete. Sarah has ploughed £2,000 of her savings into turning her body into a human shrine to the global star.

Sarah, who’s single, tells how her mum begged her not to go through with the tattoos and disagrees with family and friends who think she’ll regret it in the future.

She covers the portraits with long-sleeved t-shirts when working and insists they don’t affect her job as the tattoos are ‘easily covered’. Incredibly, Sarah intends to get even more tats and doesn’t ‘care’ if it puts men off. She said: “I’m only interested in dating Rihanna fans anyway, so if they don’t like them I don’t care. I have loved Rihanna for nearly 10 years, and I’ll love her forever.

“Some people say I’ve ruined my body, but I just laugh it off. Rihanna’s face is gorgeous, so having her image on my body makes it look better in my eyes.”

In 2005, when Sarah was 14, she became a fan of Rihanna when she first heard the song ‘Pon de Replay’. She recalls: “I heard the song on the radio and immediately fell in love with Rihanna’s voice. She seemed so edgy and different to other female pop stars.”

As the singer continued to top the charts, Sarah’s obsession for the star grew. She downloaded all her music, started buying her perfume and clothing range and plastered her Facebook page with images of the 27 year old star, who’s rumoured to be dating Leonardo DiCaprio.

In October 2012, at 19, she decided to get a tattoo of Rihanna’s face on her left arm. She said: “My mum kept telling me to think about what I was doing and be sure it was really what I wanted. But nobody was going to stop me, I was dead set on it.

“I booked an appointment with Tony Covey at the tattoo shop Aces High in Wiltshire, and showed him a picture I’ve always loved of Rihanna.

“It’s one where she’s sticking her middle finger up – I love it because it sums up her edginess. Tony seemed surprised, but I was adamant, so he went through with it.”

The inking cost Sarah £150. She says she was so thrilled with the result she decided to get a second Rihanna portrait tattooed on her thigh the following year, costing another £150.

Over the next four years, the obsessed fan – whose favourite tune is “We Found Love” – got another seven tattoos to match the singer’s, amounting to over £300.

The devoted fan also got Rihanna’s real name – Robyn Rihanna Fenty – inked on her left arm. On her right arm, she got a sentence the star was once quoted saying: “Never give up on your dream, keep holding onto them and keep working to make it happen”. She even got the singer’s infamous Isis goddess tattooed under her breasts.

In September 2013, Sarah won a competition that meant she could be personally styled by Rihanna through fashion store River Island. “It was a dream come true,” she reminisced, ‘she was every bit as feisty and cool as I knew she would be.

She has seen the star perform four times in concert but, in August 2014, Sarah’s dreams came true when she flew to America to watch her idol perform. Sarah said: “I was right at the front, and she must have recognised me because she started following me on Twitter just afterwards. From there I started planning my biggest tribute to Rihanna yet – the giant mural on my back. I decided to have her face printed five times, intertwined with the text “10.09.2013 – forever thankful”, because that’s was the date she styled me in River Island.” But the piece was to be so big it was impossible for Tony to complete it in one sitting.

In October 2014 she had the central portrait of Rihanna inked in one seven hour session. Over the next four months, Tony added four more portraits of Rihanna to the back piece. This February – after a total of 48 hours of tattooing at a cost of £1,000 – the piece was complete. She giggled: “Tony wasn’t a Rihanna fan when I first went to him, but since studying her face in so much detail, he’s now been converted!”

Sarah says she has tweeted Rihanna to show her the inking but is yet to receive a response from the star. Now, the superfan is saving her pennies for her next tattoos – another Rihanna portrait for her arm and a gun on her ribcage to match the star’s.

Amazingly, though her body is plastered in images of the star, Sarah insists that they don’t hinder how she’s seen in her job as a carer because “they are easily covered up”. She said: “My friends think it’s a weird obsession and I know my family would prefer it if my tattoos were more discreet. Guys might be put off dating me, but to be honest, I’m only interested in men who are Rihanna fans anyway. Ultimately, as long as I love my tattoos, that’s all that matters.”

Sarah’s story appeared in The Mirror and The Star and we are now in the process of securing her a TV deal and two magazine deals. If you are a superfan or you’ve got some crazy or unique tattoos, we’d love to hear from you. Complete the quick valuation form on the right hand side of this page, and one of our team will get back to you within 24 hours. There is no obligation and we won’t print anything without your permission.